A Guide on Green Screen and Chroma Key Technology 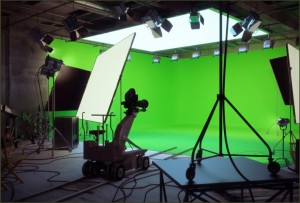 What is Green Screen?

Green screen videography has been around for many years. Green screen is used to give video editors the opportunity to substitute the green screen with any background. And there’s noting carved in stone regarding the color green. You could use blue screen or any other solid color background that you want. Just make sure that nothing in the foreground is the same color as the background.

This is because your video editor will ‘tell the computer’ to replace everything that has the color of the background with a different background, which could be anything. It’s a more affordable alternative than building some set backdrops, and is a great way to add special effects for any videographer. Your editor could replace the green screen with a beach screen, Mars or anything that works for you. You could also replace the green screen with a high- resolution photograph, stock footage or something you’ve shot yourself. It could be a still frame or moving video. The sky is the limit!

It may seem obvious, but when you’re using a green screen for video production, make sure that no color in the foreground matches the color you want to replace in the background. Otherwise, when you’re in the post-production or editing stage of your video, you might find out that someone’s shirt is missing because they were wearing the same color as the screen. That’s why they chose such an offbeat green for green screen videography. Also, make sure the costumes correspond to the backdrop. No swimsuits in Alaska, for example.

When using actors, get them acquainted with the background, especially if it’s pivotal to the scene. We’ve all seen those weather reports gone wrong where the meteorologist has no idea where the cold front is on the green screen map. You’ll probably need to practice a few takes and let the actors see how everything looks, just so they have a better sense of the space.

The lighting also has to be right. Otherwise, you’ll see a silhouette and outline behind the foreground images and people, which will make them look as though they were cut out of a scrapbook. The background lighting has to be even too. If you have shadows, you’ll have problems in post-production. Even the best post-production editing studios can’t undo a serious lighting mistake. Select your green screen background first, and then light your set accordingly. That way the shadows match up and you don’t have weird lighting inconsistencies.

If you need a green screen in a small area (for a window in a scene, perhaps) a green poster board will do the trick. As you become more and more advanced in your video production you’ll likely want to invest in a proper green screen for a more professional look. If you’d rather skip the expense of owning your own green screen, try hooking up with Chicago video editing companies to do the job for you with guaranteed professional results.

Benefits of Using a Green Screen

In a recent entry on ReelSEO, Chad Vossen, president, Co-Owner, & Creative Director for 522 Productions, a creative video production company, wrote a guest post on the benefits of using a green screen. Some of his points are covered below.

One of the coolest tricks in a Chicago videographer expert’s arsenal is chroma key which is the process where a subject is filmed in front of a single-color backdrop, and then post-production replaces the color backdrop with an image. For example, weathermen (and women) on television use chroma keying to have various maps, videos and animations appear in the background in place of the green screen. When they’re doing the weather, they don’t actually see the background on the set, as the keying is done in the editing studio. Instead, they use a monitor in front of them to see what’s being projected behind them. Then they coordinate their actions similar to looking in a mirror image of themselves.

This process is incredibly popular in big budget feature films, especially science fiction and fantasy movies. But doing this at home, or in a small video production company is rather simple and cost-effective too. Even Video One Productions has its own green screen in the back.

If you are looking for help with any of your upcoming video productions, we’d be happy to help! Contact Video One Productions at (773)252-3352 or irwin@video1pro.com.